The iconic tower has held the title of tallest man-made structure in the world for more than a decade.

The tallest skyscraper Dubai’s Burj Khalifa was inaugurated on this day (January 4, 2010), thirteen years ago. After more than ten years, it is still the most recognizable tower in the world. It holds ten world records, including the highest observation deck, the tallest service elevator, the biggest LED-illuminated facade, and the highest base leap from a skyscraper.

Burj Khalifa continued to hold the title of tallest building in 2022. At 679 metres tall, Merdeka 118 in Kuala Lumpur, Malaysia, has surpassed Shanghai Tower in Shanghai, China, to become the second-tallest skyscraper in the world (632 metres).

Dubai‘s Burj Khalifa was inaugurated 13 years ago today (January 4, 2010). With ten world records to its name, including the tallest man-made building, the highest observation deck, the tallest service elevator, the biggest LED lit facade, and the highest base leap from a tower. It continues to be the most recognizable tower in the whole world.

THE ORIGIN OF AN IDEA:

Around 2003, the decision was taken to construct Dubai with the highest tower. According to Adrian Smith, who was then working for SOM, in his book “Adrian Smith: Towards are Sustainable Future,” Skidmore, Owings and Merrill (SOM). Whose architects followed a form “that is geometric in plan, starting with three branches and three pods,” won the international design competition. The tower’s formal construction began in January 2004. Building the tower required 22 million man hours over six years.

Smith described how the skyscraper appeared to be “sculpted from the dirt and crystallised in a vertical stalagmite of glass and steel”. As it began to rise from the ground. Aerial shot of the Burj Khalifa while it is being built.

The desert flower Hymenocalis served as inspiration for the Burj Khalifa’s design. Islamic architectural motifs are also included into the tower. The tower’s height at this point is 277 metres and it already has 80 floors.

According to Emaar, its Dubai-based property developer, Burj Khalia had already set a record for construction of 160 habitable levels. The most of any skyscraper in the world — one year before it was unveiled.

According to Smith, even after the structure had topped the Kuala Lumpur landmark’s 451-9-meter Petronas Towers at 550 metres. The structure’s ultimate height (828 metres) and design had not been finalised. Business Bay and Downtown Dubai are both under construction. It was unofficially crowned the highest skyscraper in the world in July 2007.

The tower is the recipient of several awards. The world’s tallest lounge debuted at the Burj Khalifa in February 2019, breaking previous records in Dubai. The Lounge, which occupies the 152nd, 153rd, and 154th floors of the tallest building in the world at a height of 585.36 metres, provides a distinctive eating and leisure concept.

The Burj Khalifa, which has 163 storeys, is perhaps Dubai’s most notable structure in terms of height. Distinctive architecture, and all the records it has broken. More than any other city in the world as of 2022, Dubai has finished 28 structures. That stand at least 300 metres (984 ft.) in height.

In addition to the tower’s record-breaking height, it also produces up to 15 million gallons of water each year from condensation on its façade. Which is utilised to irrigate plants on the ground. This is the equivalent of 200 Olympic-size swimming pools. The Burj Khalifa dominates Dubai’s skyline as the sun sets.

For the past 13 years, the Burj Khalifa has served as a visible reminder of how visionary leadership helped the UAE usher in a new chapter in its history. Dubai’s towers rise above the city’s dense fog. While The Burj Khalifa Is 828 Meters High, The Proposed Tower Will Be 2 Kilometers...
Continue reading
by admin Luxury apartments in Dubai are among the most sought-after properties in the world. They are...
Continue reading
by admin 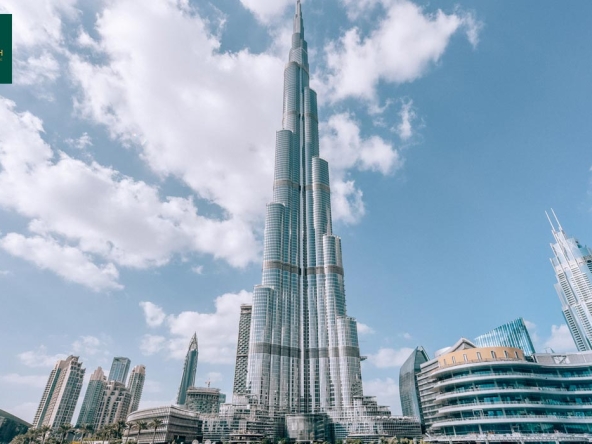 The Most Significant Land Deals Last Week Were Likewise In The Burj Khalifa...
Continue reading
by admin