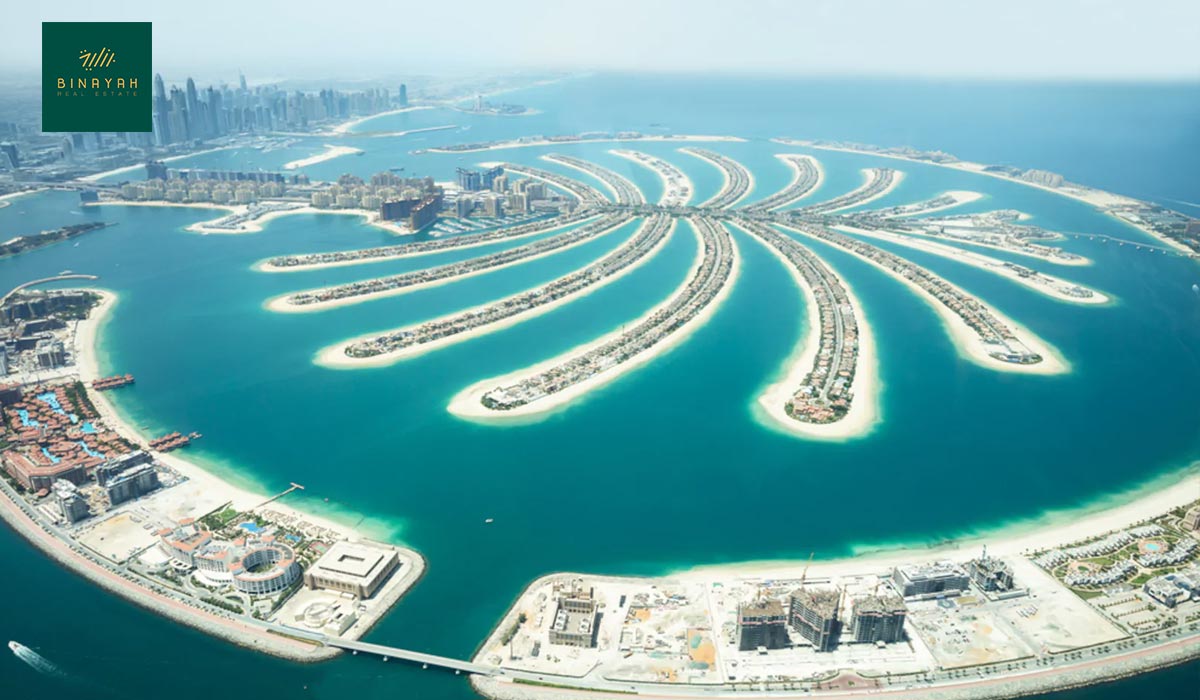 Even as demand in other regions of Dubai continues to decrease, property prices on The Palm Jumeirah continue to rise. With the island establishing new records for villas and flats. According to data from real estate firm Knight Frank, premier and expensive neighborhood in Dubai. Such as The Palm Jumeirah, Emirates Hills, and Jumeirah Bay Island have increased by 58.9% in the last year.

According to Faisal Durrani, Director — Head of Mideast Research at Knight Frank, villa prices on the Palm Jumeirah have climbed by 38.6% in the last year. “With worldwide purchasers jostling for an address in Dubai’s most elite enclaves, the Palm Jumeirah & Emirates Hills continue to solidify their legendary reputation,” he says.

According to data from Luxhabitat Sotheby’s International Realty, based on data from the Dubai Land Department. Area is close behind Mohammed Bin Rashid City (Dh3.19 billion) in terms of total sales volumes for Q1 of the year. With Downtown Dubai coming in third with Dh2.6 billion.

After luxury firm Belleview Real Estate sold a ten-bedroom, custom-built mansion for north of Dh280 million in March. The island set a seven-year record for a Dubai property transaction. The property has 33,000 square feet of living space, a gym, and a hair salon. As well as more than 70 meters of private beachfront.

A European customer had paid Dh63 million for an 8,600 sq. ft. beach villa on The Palm Jumeirah inspired by Los Angeles. According to tracking data from the Dubai Land Department, two villas at the Six Senses complex sold for over Dh80 million each in the same month.

According to realtors, The Palm holds its own because it provides a one-of-a-kind living experience for high-end buyers. The Palm is regarded as an elite resort and is sometimes referred to as the world’s eighth wonder. ”The lifestyle it provides by living near the beach and sea is unreal, and the rates being provided now are amazingly good.” Stated Rakesh Mirchandani, Founder and CEO of RNR International, a boutique real estate agency.

“The majority of purchasers on The Palm desire to live near the beach or the sea. This island now has much more to offer with the recent addition of Sn Beach, a beach club, and new five-star hotels including the St Regis Dubai and The Palm.”

Even at the high end of the market, Dubai luxury real estate is more affordable than equivalent properties in other major cities across the world. According to sources, a square metre in Dubai is roughly five times less than in London, three times as likely times less than that of New York or Singapore. Despite the price hikes, Dubai is still regarded as one of the cheap megacities in the world, according to Mirchandani.

“Waterfront freehold property has always been in great demand,” says Connor Savage from Powerhouse Real Estate. Nowhere in the Emirate can equal the range, quality, and accessibility quite like Palm Jumeirah.

He claims that The Palm’s appeal stems from the fact that it has something for everyone. From studio apartments to custom-built super-prime beachfront mansions. In addition, that it provides waterfront living while real estate projects inland continue to increase.

It has had a long time to work out kinks and ease the building of hotels, retail malls, pubs, and restaurants in a variety of locales. “It is widely regarded as the most recognisable address in the world, and it has a growing list of attributes. That are attracting the attention of clients from all over the world,” Savage explains. “With the recent housing boom, purchasers appear to believe that spending more now will net them much more in the months and years ahead.”

However, for those who find The Palm lifestyle a little too extravagant. A number of other options that provide a comparable lifestyle at substantially reduced prices. Buyers searching for a comparable category might check at Bluewaters Island, Dubai Marina, Madinat Jumeirah Living, or La Mer, according to Savage.

Dubai Marina, in particular, suits purchasers searching for flats in high-rise skyscrapers with seaside views, according to Mirchandani. However, he recommends Dubai Hills Estate for villas that provide the same level of luxury. The estate has profited from a boom in demand for villas and townhouses in the aftermath of the epidemic.

“Emaar has created a township called Dubai Hills Estate. It is home to one of the top golf courses in the world as well as one of Dubai’s largest parks. The golf course provides breathtaking views of Downtown Dubai and the Business Bay skyline which includes the Burj Khalifa. A five-bedroom home in Dubai Hills Estate starts at Dh12 million, according to Mirchandani.

They are supported by data. The greatest search volumes in April were for sales in Dubai Marina, Downtown Dubai, Palm Jumeirah, Business Bay, Jumeirah Village Circle, and Jumeirah Beach Residence, according to statistics from the real estate portal Property Finder. Dubai Hills Estate, Palm Jumeirah, and Arabian Ranches led total searches in villa and townhouse category in the same month.

Overall, Mirchandani believes that the visa change will help purchasers throughout Dubai. “Many investors and those who want to invest and migrate here will be enticed by the recent announcement of a 10-year golden visa for an investment of Dh2 million or more.” Despite the fact that it is anticipated to take effect in September, we have already witnessed a surge in queries and interest.

Over the medium run, capital values appear to remain appealing. While another 100,000 units are projected to join the market by the end of 2025. With over 50,000 houses scheduled to be finished by the end of 2022, just 25% of the homes planned by 2025 are expected to be villas, according to Knight Frank.

“The influence of the supply pipeline on the market’s forecast should be divided by property type and location.” Only eight new villas are scheduled to be built Expensive Neighborhood in Dubai between now and 2025. Implying that villas at the top of the market will continue to outperform. Since there is no sign of the luxury housing shortage abating.

As Dubai Rents Spike, Proprietors Reflect Whether To Rent On 1-Year Contracts Or As Occasion Homes