To Appeal To European Consumers, Dubai Developers Have Recently Added Additional Luxury And Pools To Their Projects.

A significant difference is opening up between property prices in Dubai sold off-plan and those purchased in the secondary market. Providing additional chances for purchasers. On average, recent off-plan launches in Dubai have price tags that are 14-30% more than equivalent ready apartments. A significant disparity that might grow further.

In Dubai Hills, average price per square foot for a property sold direct from the developer is Dh1600. Compared to Dh1400 PSF for a unit purchased through an investor. Dubai Hills is now one of the most popular sites among investors and end-users alike. Moreover, more releases are on the way, such as Emaar’s Address-branded villas.

On Downtown Dubai, the developer’s price tag averages Dh2600 per square foot, compared to Dh2000 in the secondary market. According to DXBInteract.com statistics, the Palm Jumeirah and Dubai Marina are seeing similar trends. According to CEO of FAM, “It’s not just that developers are asking more for off-plan properties.” “This is why there is a per square foot differential between ready and off-plan.”

In addition, this presents an opportunity for purchasers, particularly end-users. Because mortgage rates have risen dramatically since the beginning of the year, purchasers will be forced to look elsewhere to minimize their entire financial commitment. So, if they can get a mortgage on a ready home that is 10-30% lower than an off-plan choice, end-user purchasers are falling behind ready.

Pooja Biswas bought a two-bedroom flat in Business Bay in 2020, at the opportune moment. Pooja, a groomer and social media influencer, relocated to Dubai with her husband in 2015.

“We wanted an apartment with a good view close to the city core.” This apartment has a sizable balcony with views of the ocean, the Canal, the Burj, and Business Bay as a whole. Aside from that, it has a separate maid’s room and all of the conveniences and services of a city residence. We also purchased it at a very excellent price because the market was significantly lower after the epidemic and has already appreciated by more than 30%.”

Dubai’s Prices Have Levelled Off

Surprisingly, only off plan property is still seeing price increases inside Dubai’s residential freehold. The DXBInteract.com research states “prices are starting to decline for all property categories with the exception of offplan apartments, where we see an increase of almost 33% compared to July 2021.”

In other cases, off-plan villas are also experiencing price stability or declines, in addition to ready-to-move-in apartments and villas. The best news for investors and end users is that the property market has to cool off in order to maintain demand during this cycle, according to one estate agent.

Who is Purchasing Off-Plan?

As the month of August ends, it has already been a busy one for off-plan lanches or new releases. With Azizi delivering, it is most prestigious collection of structures 24 of them within Riviera neighborhood in MBR City. Additionally, many Dubai developers are including green areas and even private swimming pools in their residential towers.

Current tendency, according to a developer, is for purchasers and investors to want more opulent features in their off-plan purchases. The crisis between Russia and Ukraine may not be the only factor driving more Europeans to the UAE. It appears that a scorching heat wave in Europe is also driving up demand for real estate in Dubai.

It makes sense for developers to pique different types of consumer interest. Next waves of buyer interest in Dubai real estate may hit the up-and-coming hotspots Emaar Beachfront and Dubai Creek Harbour. While Dubai Hills and Dubai South (Expo City) will maintain their high levels. Lewis Allsopp claims that in the first half of 2022, transaction volume at Allsopp & Allsopp increased by 60%”.

Regarding Emaar Beachfront, Robert Villalobos, stated, “Handovers have already started with residents taking up occupancy in some of the finished towers like Beach Vista.” There are still a lot that are being built, and handovers are scheduled to occur between now and 2027. Despite this, there is still a high level of buyer interest.

Dubai Property Transactions In July Were The Biggest In A Decade The Development Includes Villas With Four To Five Bedrooms Tucked Away On White Sand...
Continue reading
by admin 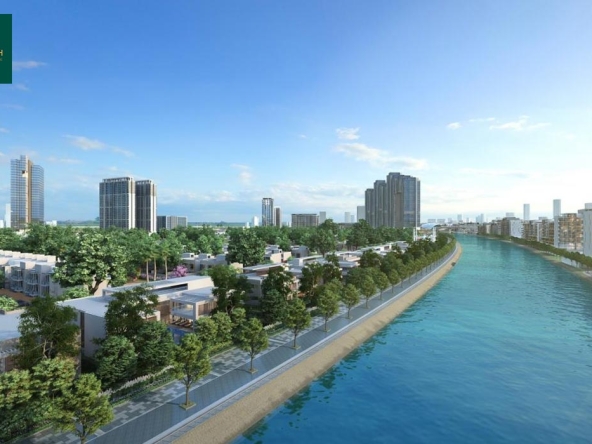 Sobha Hartland is a gated community that focuses on a comfortable and elegant lifestyle. It is...
Continue reading
by admin