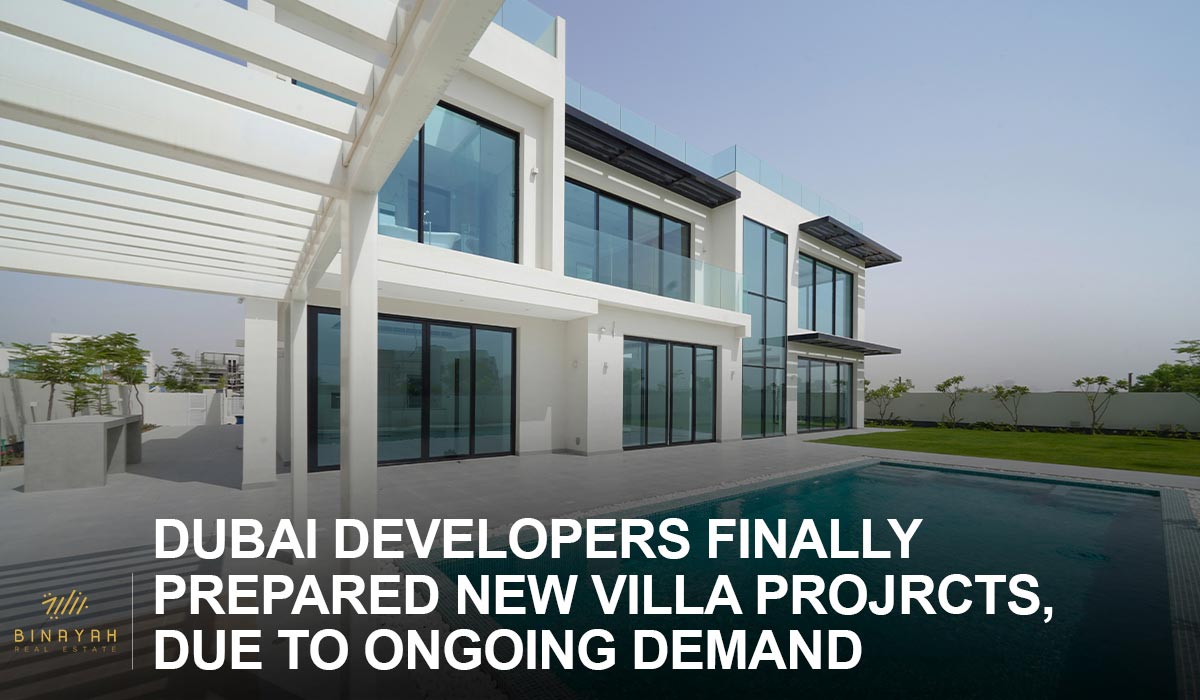 Are there not enough new villas? Don’t worry, the demand for villas is driving developers in Dubai to fill market gaps. Whether mid-priced or of the Dh100+ million variety remain strong. On “one of the few plots available” at that affluent neighbourhood, Signature Developers.

Which owns the Taj Hotels’ tower in JLT, stated it would be constructing a collection of villas at Jumeirah Golf Estates. Raju Shroff, a partner at the development, stated that “these villas are not going for uber-luxury of Dh100 million and higher.” Prices will range from Dh18 to Dh35 million, with one going up to Dh50 million. “Our goal is to provide an ultra-luxury atmosphere at JGE (Jumeirah Golf Estates) connected to Dubai’s trendiest areas. It is feasible.

By placing the garages beneath the villas rather than on the exterior, Signature will also use the available land creatively. In reality, according to Shroff, “the subterranean spine will span across the 21 villas, and where each owner can store up to six of their automobiles.” “The idea is to drive down and enter your property on foot. Due to the sloping nature of the terrain, we thought that the 189,000 square feet would be best utilized by removing the garages and leaving more room for the individual homes.

Construction and off-plan sales are scheduled to begin in September or October. Owners will only be 50 metres from the clubhouse in this closed community within a gated community, according to Shroff. There was less inventory of villas available for purchase during the first half of this year. Since most of the ones that were available were purchased the previous year. Which also explains why villa asking prices increased this year by 15% to 30%.

One of the largest investment corporations in the Gulf, Bahrain’s GFH, is in this situation with the timely introduction of a villa and townhouse-only project in Dubai. The construction of the “California Village,” which is situated in Dubailand and is close to IMG Park, will cost $187 million and be completed in two phases. The price range of the properties in California Village is Dh1.7 million to Dh4.6 million.

Phase 1 offers five-bedroom “twin-villas” and four-bedroom townhouses for prospective purchasers who do not want to wait. Townhouses in Phase 2 with three to four bedrooms are available off-plan. The developer offers an additional perk by enabling 70% of the payment to be made over five years after handover.

According to Wassim Abdallah, Head of Off Plan and Investments at Betterhomes, “With growing mortgage interest rates, this payment plan would help end-users by borrowing less from banks.” “GFH has successfully launched several projects all over the world. Moreover, one of its flagships, Harbour Heights, helped to form Bahrain’s skyline. They have now made their way into the Dubai market.

Increase the Frequency of Villa Releases

Since the second half of 2021, when the off-plan boom re-emerged, developers in Dubai have mostly concentrated on residential buildings or more specialized products. Villa-only developments were thought to be more prone to market fluctuations and lengthier construction times. Additionally, it was believed that the city had a sufficient number of ready villas to fulfil demand.

According to market experts, many developers made a mistake in the past statement. Because demand continues to outpace the market’s supply of villas and townhomes. The Akoya and Lagoons developments by Damac have benefited. While specialist projects in Jumeirah have also seen record demand.

According to one estate agent, “all of which insured that developers had to move up their launch plans for villas. Or someone like Emaar, Nakheel, Wasl or Dubai Holding could easily launch new projects and take in much of the demand that is there.”

Top 5 Questions Ask Before Buying A Home In Dubai